The thief Prometheus stole fire from the gods and presented it to mankind, and as his penalty for giving us civilisation, Zeus had him summarily tied to a rock and had his liver eaten daily by an eagle. Raw. And his liver grew back so the eagle could continue its feast.

So goes the ancient Greek myth anyway. Having received fire, we brought it first into our caves and then houses and it kept us warm and helped to feed us. In short, we depend on and need fire to survive. And we still celebrate it by enshrining it in our houses, in hearths. Of course hearths now have a more generalised meaning as a homeplace or household. 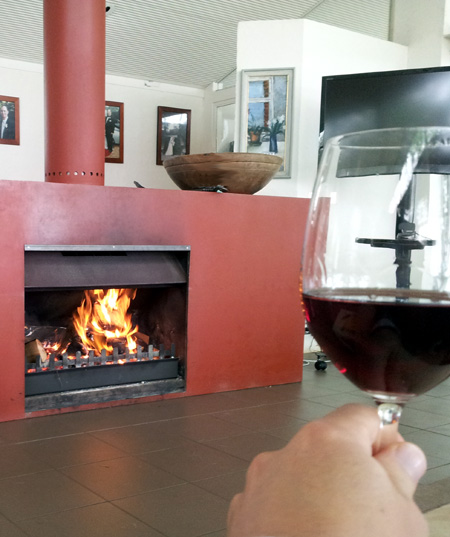 Cold winters, warm fire and a glass of red are common in Bowral

Evidence of pre-historic man-made fires are in evidence on all five continents but luckily the technology of fireplaces has improved such that the toxic smoke exits the building far more effectively. Chimneys were invented around the 11th century in Europe but being expensive to build and maintain didn’t go into general use until much later.

Eventually the fireplace received more decorative features and began to become more widespread. In the Renaissance, architects designed fireplaces, most notably Inigo Jones and Sir Christopher Wren who integrated the look of fireplaces into the home.  Further significant developments of the fireplace included the hood and chimney, the raising of the grate which improved airflow and venting, as well as materials and design.

It has come to the stage that fireplaces are the central part of the house again and are driven primarily by aesthetic considerations. Now the choices are quite surreal with electric, ethanol, gas or traditional wood fires predominant. Naturally each have their own advantages and disadvantages. Minimalist design has eroded the traditional decoration around the fireplace but with the additional leap in technology so has the efficiency.

Today, some fireplaces equipped with windows and a cleaner burn can get as high as 80% efficient and only need one or two firings a day to get the room to a constant room temperature. That’s a far cry from the 15% efficiency in standard construction. Fires can also be controlled by smarthouse systems and controlled remotely by your phone or tablet.

There is not much that can compare to having a warm wood fire in the middle of winter. Now we can lounge by a warm efficient fire in the depths of winter, drink a glass of wine and think of the Titan Prometheus and toast he and his liver in good health.