In April 2006, Apple purchased nine adjoining properties to build Apple Campus 2 in Silicon Valley, USA. Let no-one be confused – this building will be ridiculously massive. And as is not uncommon with ridiculously massive buildings, the construction is already delayed before it even begins. It is now expected to begin construction in 2014 and open in 2016. They will be requiring a similarly massive number of bodies on site to get this completed in 2 years. 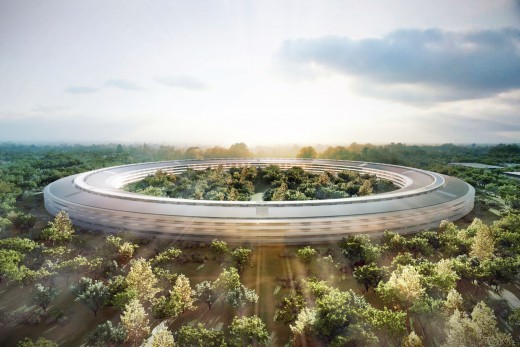 The new campus, on a site now totaling 70 hectares, is planned to house up to 12,000 employees in one central four-storied circular building of approximately 260,000 sq.m, which will include a 5,575 sq.m dining facility for 2,100 sitting people (plus additional 1,750 seat capacity outside), be surrounded by extensive landscaping, and offer parking both underground and in a parking structure. Other facilities include a 1,000 seat auditorium, 28,000 sq.m of R&D facilities, a fitness center, an orchard, and a dedicated generating plant as primary source of electricity.

Intelligently, Jobs once said : “It’s a circle, so it’s curved all the way round. This is not the cheapest way to build something.” Every pane of glass in the main building will be curved. Normally, the German company Seele who is producing the curved glass deals ‘in terms of square feet’ but it now has to manufacture something like six square kilometres of glass to cover the building. They now have to double its factory capacity to finish the project – a project in itself.

There will be 10,980 car spaces and they will plant an additional 2,494 new trees. Ridiculously massive I think we can all agree, but I wonder if the delay is partially a result of the massive fall of Apple stock over the last few months. Time for a new iPod/iPad/iMac release to pay for this i-Massive HQ.

Does it fit into its surroundings or does it dominate it? Does it look out of this world – why should it? What do you think?  Let us know below.